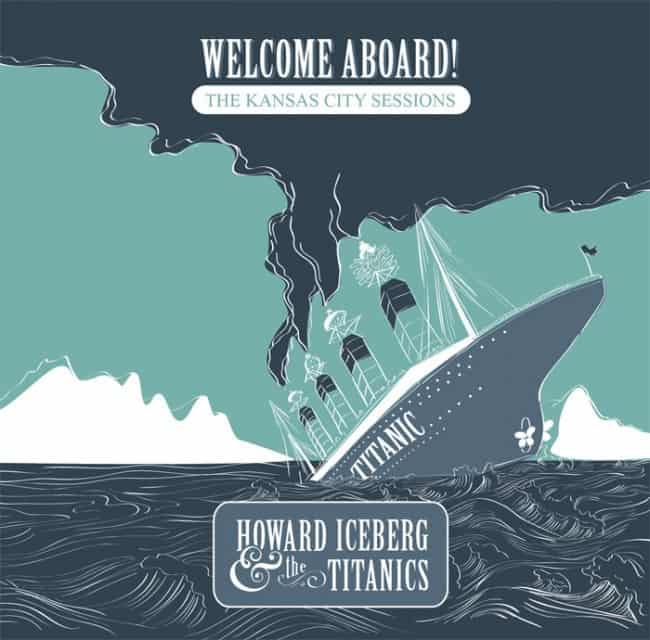 This is a corrected english translation of THIS ARTICLE, to remove all the errors google translate brings, as this article is getting a lot of english speaking readers. I have skipped all formatting and images here, to see the article as it is meant to look, scroll through the Norwegian original afterwards.

Thank you for your interest! Now, on to the good stuff:

A man who sadly is completely unknown in Norway, and for strange reasons does not register as a big name in the United States. With the exception of his home town of Kansas City, where friends last week arranged a tribute show called «Raising the Titanic, An Evening with the Music of Howard Iceberg» – with over 50 musicians who came together to play their favorites from Howard Icebergs amazing repertoire. At the show he released the seven cd-box «Welcome Aboard».

But let me rewind a bit and come up with some additional information.

And I apologize in advance that this has become the longest article on this bog so far, but it is difficult to limit the good words when Howard Iceberg is to be described.

I was first introduced to the concept that is Howard Iceberg when I met Pat Tomek, drummer of The Rainmakers for the first time. I was wearing a «No Depression» t-shirt, and one of the first things Pat said to me was that «you have heard of Howard Iceberg? The people in No Depression are big fans. «

And my curiosity was off course piqued. Pat told me about a musician and songwriter who constantly wrote songs and recorded them in his studio, to get as much as possible on tape in what Pat referred to as «draft form.»

When The Rainmakers left Norway, and went home to Kansas City, Pat sent me a stack of CDs, Howard’s being one of them. And that feeling of hearing Howard Iceberg for the first time is almost indescribable.

The man known as «Kansas City’s Rock-Shaman» is actually named Howard Eisberg, and during the day he is a successful and very busy lawyer. He turned 64 in May, and only started writing songs and performing when he was about 30 years old.

And in that time, he has written over 800 songs. Of which approx. 500 only exists as simple sketches with Howard and his guitar, recorded in Pat Tomek studio.

The remaining 300 have a little more meat on the bones, and has an ever-changing musician clientele – his backing band The Titanics has sported a wide range of musicians – over 70 persons must have visited the project and all have left their mark on the songs that have gotten a more extensive treatment in the studio.

He calls the project «The never-ending recording project», and it counts as I said about 800 songs. 105 of these are now out on 7 CDs in the massive release «Welcome Aboard».

Howard tells me that he still writes new songs, and that it is not unusual for him to write a new song every week. Which would mean that he can quickly come up with 50 new songs each year. And to write large numbers of songs is one thing, but what grabbed me when I first played the cd Pat had sent me was the quality of the songs and for me the most important – the lyrics!

First and foremost, in my ears I hear Howard Iceberg sounding like a Dylan around the time of «Blood On The Tracks». He writes songs that I will not hesitate to place in the landscape around Dylan, Townes Van Zandt, Warren Zevon and Neil Young. And the content in the lyrics is yet another reason why I pull Dylans name from the big hat.

But mainly it’s because Howard writes about people, and relationships between people at all stages of their lives, about why we do what we do – and often have questions that you always pondered, but failed to put into words. All in a way that was Dylans biggest strength around the time of «Blood On The Tracks».

For example, a broken heart in the wonderful «Tattoo» (vol.3):

To say it simply, Howard writes tiny novels at about. 4 minutes in length, where you can take part in the lives of characters who are painted with so strong and bright colors that before the song ends they are presented as real people who you in many cases would like to meet …

Live, he is constantly seeking that direct connection with his audience, and he has a cult-status as frontman in the music scene in Kansas City. He plays guitar in his unique way, with the guitar flat like a dulcimer – but not tuned like a dulcimer.

Having heard and listened, and listened and heard these songs, I craved more, and found Howard’s only commercial release on eBay; the album «Hindu Equations» which of course is a brilliant product – although a little lacking production wise.

And my honest and sincere opinion is that if Howard Iceberg took 15 of his strongest songs into the studio with the band which now constitute the Titancis – and got T-Bone Burnett to produce it, the world would be left with one of the strongest albums in modern rock history.

When I contacted Howard and in one of our emails told him this, he told me that he simply doesn’t have the time to polish the songs in the studio. When I later read some other interviews and articles, I found that he has previously been frustrated about the process of recording «Hindu Equations» and its planned sequel, which ended up being the self-released «Final Fade», one of the four self-released CDs of his, a process that also counts 3-4 tapes. Copies of which he gave away to fans at his concerts.

Another one of these self-released cd’s is «November Nights,» which is a album made and sold in support for a musician friend in Kansas City. And you can actually hear it in full on Spotify.

He also tells Musikkbloggen that the songs he has recorded he thinks of as sketches that he hopes others will continue working on when he one day quits.

And it is the songs that are important here, since the production in some cases are, as I said, merely sketches. But sketches or not, the lyrics are just as intensely direct, no matter how the production sounds.

It is also important not to underestimate his bandmates here, among all the past and present Titanics there are incredibly talented musicians. And his current, regular band, consisting of Scott Easterday, Gary Paredes, Dan Mesh and Pat Tomek are all great musicians, and they really suit the concept that is Howard Iceberg & The Titanics.

Those who have helped on the seven CD’s have all left their mark on the songs in their own ways, and it is at times the level of musicianship is really impressive!

The seven CD’s in the big box «Welcome Aboard» are loosely divided into different themes, and all have their thin red line that can be followed through each CD. Music writer Danny Alexander has written great liner notes, and guides us comfortably through the tracks on each CD, which comfortably puts Howard’s lyrics in context.

Alexander has named Volume 1 «Lonesome Town», and it starts off with a song that is perfectly descriptive of this entire project.

“I’ve been working on a project so big,
I can’t get it out of my room.
I thought that it would be like a monument to me,
turns out it was only a tune.”

The wonderful «In This Lonesome Town» follows, and the duet with Abigail Henderson is not only one of the best songs on this album, but one of the most beautiful songs I’ve heard.

From this touch of country we slip elegantly into dirty rock’n’roll in «L.A. When You’re All Alone,» which on the surface is about the people who go to Hollywood and California to become stars – but at the same time it says even more about people and loneliness.

Safely back in Americana-country we’re presented with the lovely «Because Of You,» a duet with Royal Scanlon – a song from Dylan-country around the time of Nashville Skyline.

A song about the nerves and anxiety, «Nervous» where he lists the major and minor problems, is the next treat – and in a humorous way Howard puts the spotlight on anxiety and obsessions with the character in the song.

«Honkey Tonk Jamboree» is a good example of some of the songs being sketches, as there is just too much going on – and not everything fits together. The lyrics are still brilliant, although they get a little drowned out by the instruments that have not quite found its place yet. But this is also part of the excitement with Howard Iceberg, we are able to participate in the process, and the songs are almost created while we walk through this album together.

…he sings in «The Wrestler». And follows up with a story about loss of hope and faith – in which truth plays the lead role, and an organ and the female voice is the supporting cast that elevates this track to become one of the absolute highlights of this album.

Loneliness is a subject that we keep returning to on this album and «Lonely For You Love» is more specifically about the quest for love.

Volume one hasn’t received the title «Lonesome Town» for no reason.

«Dark Samba Blues» speaks of heartbreak after a stormy relationship with a woman who was over the character’s social and/or personal status.

In the Dylanesque «Kathleen», who might as well be the sister of the girl from the North Country or picked from the «John Wesley Harding» album, we find one of the best lines of lyric on the cd. A line I also observe liner notes writer Alexander has taken note of. Which does’t surprise me one bit. This is poetry!

“once upon a time, time stood still.
Then they put it all in motion.”

«She’s Just Right» is a wonderful song about that girl suddenly you see in a random bar, dancing her heart out. You can see that she is pursued by dark clouds waiting outside the door, but right here and now she is «Just Right».

The riff from Dylan’s «Silvio» is lifted straight on top of the delightful «Baby’s Got A Dark Side» A wonderfully ironic song about girls who are not quite as they seem on the outside.

A country-ish ballad is the next song, a duet with Sara Swenson in «Playin ‘Hard To Forget» that is simply amazing. YET another highlight, and partly because of the lovely guitar that accompany the two singers.

The absolute highlight on this album is the lovely «Calling You Back,» where the main character hunts for a lost love – and all the while offers up lines like this;

“Time has not been good to me,
’cause I always see everything I left behind
… …
callin’ you back, back to the past”

The final track is «Our Last Night,» which is a story about a couple on the verge of break-up, where he puts into words the thoughts most people have had at some time in a relationship which clearly is going downhill …

“is this our last night?
our last kiss?
our last touch?”

So, my dear friends. Do yourself the largest favor of your life: Familiarize yourself with one of the music world’s best-kept secrets. Listen to Howard Iceberg and become absorbed in his fantastic universe today!

The Monthly Iceberg: LA When You’re All Alone